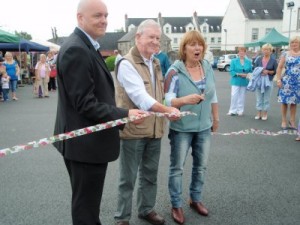 The first Comber Farmers’ Market which was held on Thursday 3 July has been hailed a big success!  Thousands of local people arrived at St Mary’s Parish Church Car Park for the first market to taste, sample and buy fresh seasonal food produced by local people.  The market was opened by Councillor Deborah Girvan who along with Mike Moore and Roy Murray had worked tirelessly for a year to get the market up and running.  In the church hall, cookery demonstrartions using ingredients from the market were prepared by local chefs.

Tina Breteche from Mange Tout Deli in Downpatrick who had taken a stall said, “Comber Farmers’ Market was very, very good. There was a great buzz and atmosphere.   Our products were well received and we sold out of everything. We will definitely be back next month. “