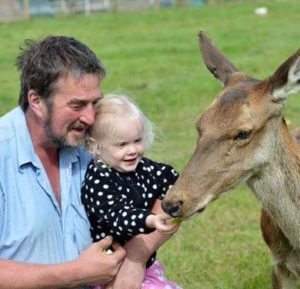 Forthill Farm derives its name from an old Ring Fort on the farm and has been farmed by the Gracey family since the early 1700 and before.

Forthill has always been a mixed traditional farm. From an early age my love of animals was evident milking cows, feeding the animals both before and after school indeed on many occasions staying of school to work on the farm as my father was on the road most of the time (a cattle dealer).
Fast forward to 1992 when I met and married Jennifer and we continued farming. Although Jenny was a city girl she soon adapted to the country way of life helping in daily duties. We both had a love for rare breeds and so a few were kept alongside their modern breeds and started their journey to diversify.

Saddĺeback pigs were a big favourite producing succulent pork with a generous covering of fat. The dry cured bacon is as many customers say is proper bacon like it used to be. The sows kept mainly outdoors naturally.

Belted Galloway and Longhorn cattle are the two cattle breeds kept very suitable for their ability to produce beef from grass as no concentrates or fertilizers are used.

Forthill farm shop opened in 2008 such was the demand for their produce and a full time butcher was employed.

Forthill farm attend farmers’ markets. shows and festivals and are at Comber Farmers’ Market every month where we have a built up a great following with our customers.